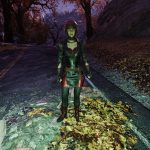 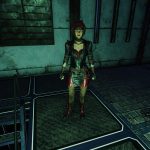 The Bloodeagle Merc Charmer fishnets will now show “skin”.
Not sure if they wanted to do fishnets over leggings or just a bug. I’m assuming a bug looking at the outfit in prior games

Fix
Comparing the 76 textures to the FO4 Creation Club version, noticed the skin is painted in w/the fishnets, but transparent in 76. Maybe they thought having it transparent would make the skin show through, but it doesn’t. Guessing they would have needed to modify the nif some more.
So really just painted the skin into the texture like the Fo4 version (which is way higher resolution..)