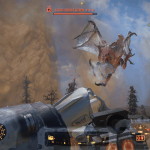 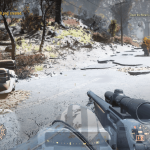 Meter76 is a damage meter tool which tracks total damage done/DPS for each player, for a given combat session. See the attached pictures to get an idea of what that means. The tool is able to track the aggregate damage done for everyone nearby, as well as individuals, and gives stats like critical %, number of hits, fire rate, etc.

A brief explanation of the settings:
When a player does damage it begins tracking damage and that is considered the current combat “session”. After a certain period of inactivity (where no damage is done during that period), the combat is considered finished and it will recalculate the DPS based on the total duration of combat.
The combat timeout period is a setting called “Combat Finished Timer”. The default value is 10 seconds but I would suggest setting it to a high value like 60+ seconds for a fight like the Scorchbeast Queen (so that combat doesn’t end when the queen flies away and everyone is idle).
Additionally there is a setting called “Recent DPS window” which tracks DPS achieved but only within a short timeframe (i.e., based on damage done in the last 6 seconds, by default).
Also note that the window is resizeable by dragging the bottom-right corner. It is also by-default set to Always On Top but you can right click the title bar to disable this behavior.

You will need to unzip the files and run the program as an Administrator to get it to work. (running it without unzipping will fail, and running without administrator will fail). Note that if it does fail for some reason it will show a red dot indicator: mouse over the red dot to get an explanation as to why it failed.
In addition the columns displayed by default can be changed. Right click on the column headers and you will be able to see additional columns and show/hide/move columns to set it up the way you want it.