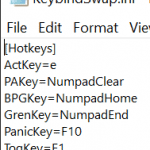 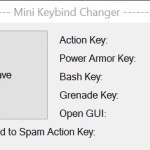 I made some improvements to Mini Keyboard Changer.
Original mod by Ay F Kay 1413.

Original mod here created by Ay F Kay 1413
I made some improvements to the original .ahk that I think some people will like.
Adds a GUI to customize settings, can also be edited via .ini after the first save.
Comes in a standalone .exe so you don’t need Autohotkey anymore.

Added a fix to the mouse wheel to split it from the weapon wheel as well. Optional (No Mouse Fix) version
Additional Info from the original mod:

Action Key = e ;Activate Keybind – the current one in the game settings (E by default)
Power Armor Key = Num5 ;Exit PA Keybind – the key you chose for exiting the PA (set this to what you want)
Bash Key = Num7 ; Bash/Power Attack/Grenade Keybind – the current one in the game settings (Alt by Default)
Grenade Key = Num1 ;Grenade Keybind – the key you chose for tossing a grenade (Set this to what you want)
Open GUI: Opens the macro menu so you can edit it some more instead of the .ini.
Toggle Key = Opens Toggle On version, which makes the E button kind of spammy, Off press 1 again to revert back to original E press behaviour (will also start getting into Power Armor again with E)
Installation
Place files into a directory of your choice, run either one, it doesn’t matter they’re both the same they’re just needed for F1 key to work functionally.
Configure bindings you want and then click save.
This will create a .ini file that you can edit; keybinding list here the .ini will be called KeybindSwap.ini
Alternatively you can just open the GUI.