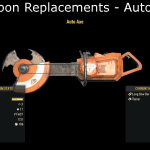 WARNING: The game lowers the volume of some sounds including the Minigun’s barrel spin sounds, which this mod replaces with the sounds from the Auto Axe mods. I countered this by increasing the volume of the sounds from the Auto Axe mods by about 2.5 times, so be aware of this if you decide to listen to them outside of the game. Also note that the chainsaw also uses the Minigun shredder barrel spin sound.